This is the gold set of the Wright Baby Racer

The Wright Model R was a single-seat biplane built by the Wright Company in Dayton, Ohio, in 1910. Also known as the Roadster or the Baby Wright, it was designed for speed and altitude competitions.

The Wright Model R was derived from the Wright Model B, and was a two-bay biplane with rear-mounted twin rudders mounted in front of a single elevator and carried on wire-braced wood booms behind the wing and was powered by a 30 hp (22 kW) Wright four-cylinder inline water-cooled engine driving a pair of pusher propellers via chains.(source: Wikipedia) 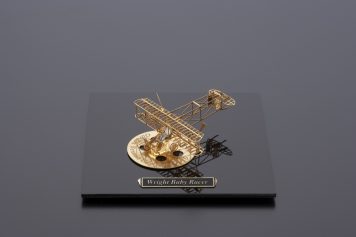